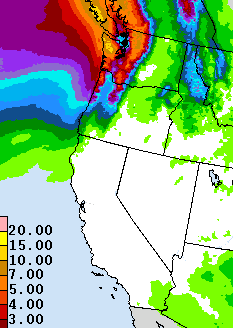 Although we're over an inch above normal for November (12½" in total), we seem destined to add about three more inches before December finds us. An atmospheric creek, or worse, hits Thanksgiving day (as of today's models). Another decent dump joins in the fun over the weekend, most likely Saturday. Rough times continue in Vancouver, where every eastbound highway is badly damaged from the last set of deep storms.

November is typically the wettest month of the year, with December averaging nearly 1½ inch less. The last three Decembers were over 10 inches wet, and each of them was higher than the November of that year.

I'll overwrite this spot as perpetual changes happen.
Looking ahead not back!

Cameras: Pentax K-s2, Lumix gx850 Olympus E-M1 'Classic'
The K-s2 can be seen from many angles; I choose to see it as the K-5IIs components reborn into a smaller body with a higher-res sensor and a few years of K-3 improvements. It loses a few items here and there, but mostly things that don't concern me. The K-s1 was interesting but lacked so many Pentax features; the K-s2 restored most of those, tossed in a flipout screen and the composite tricks and better AF components of the IIs and K-3. Yay!
On the µ43 side I stepped away from Olympus for a tiny and lightly-used GX850. Farewell to eM1 and sealed 14-150, hello 12-32 and mini primes. I have a slightly damaged 14-140 with OIS for more tele and versatility when it's needed, but the 135/3.5 Pentax prime is 1.3 stops faster at the long end.
Lenses (native µ43 primes): 'pixco' 8mm/3.8FE, TTartisan 17/1.4, Oly 30/3.5 macro, Zonlai 50/1.4

This set of four are all small and/or light, and do their jobs well enough for now.

These are handy, compact fill-ins for the inexpensive teleprime gap that exists in µ43. The 85mm is a long-time favorite of mine, and this (third?) time I'm keeping it!!

Also in an encore performance is the cute little Pentax 135. Most copies aren't very sharp wide open but improve quickly, and it's small enough to take nearly everywhere. This copy is quite good wide open though, better than my previous copies.

Read more »
Posted by granitix / Longviewer at 8:30 AM No comments:

Unexpected deals overtake me, again - so the kit mutates.

These new items are not free but definitely cheap, so some savings accrue. The PayPal balance rises, but proceeds from selling the eM1 and Olympus 14-150 v.II go to our checking account where we can make use of it. I lose the Live features, but Pentax has wr ibIS and composite shooting so that'll do pig.. that'll do.*
God help us, every one.
*Wow, and I haven't watched Babe in ages!

That changes a few things!

The K-7 brings me a tougher body design than the K-s2, a less versatile sensor but controls I know well. It's definitely not a K-5ii-level system - but it came to me at a surprisingly low price. Since I also have a spare Li90 battery sitting around, it immediately has a spare battery (total of three). It also has the curious 3:2 video mode that I envy compared to every modern camera's 16:9 ratio (I hear instagram has made 1:1 a popular video format; I wouldn't know).

It looks like the basic system is here for now:

No doubt more will accrue at some point. For now this is it.
After some contemplation, I expect that I'll allow the K|s2 to arrive and give it a shot to win me over. I still really like what it offers, and if I sell the K-7 and smc-A 28+50 it's nearly a draw.
Posted by granitix / Longviewer at 3:46 PM No comments: 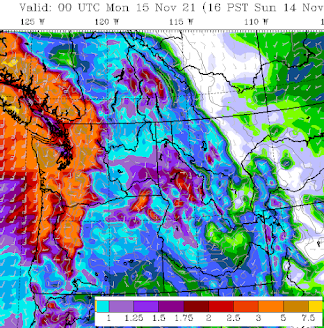 This is the time of dampness. In order to hit the 11" average for November, each day should average .35 inches! So a graphic like this one says we're in a week of typical November weather.

Well OK this is a touch high - but of course one dry day can make a difference! Our home on the hill-top is in the 3-5" band, but quite near to 2.5 and to 5". Another atm-river (atmospheric river not cash flow!) will hit late in the week, so it could be a fine line between 2 and 5 inches somewhere in the region.

Snowpack is impressive for early season, but that too will reset to zero if the at|River comes with its 8000' freezing levels. Local ski areas hope to be running at low capacity for Thanksgiving weekend, so none of this is surprising.

And so October 21 exits, with a few sunny days! That ends tonight (yes true, that happens every night) as November storms are lined up to get us through the wettest month of the year.

Interesting to see that three of our last four Octobers have been very similar in total rainfall. Note that November has generally been below the 30-year average (purple column at left) so calling it our wettest month has an asterisk. In fact January has been consistently above average over the last six years, so its average observed of 10.2" is our wettest month, with February close behind; Novembers have been the driest of the Oct-Feb period! Note that 20" October in 2017 though - the wettest of Any month here on the hill-top!

The new PRISM data should be available in the next few months.

Our new 'lawn' has been challenged by the late-month deluge. We received over five inches of rain from the 20th through the 29th, and of course the sun angle has lessened substantially. Guess I need some gro-lights (or SAD lights?) for that dark corner of our yard! It is a sun-and-shade seed mix, but a pinch of daylight has become precious. Hopefully it will hang out and spring will rekindle its enthusiasm!

The K-5.ii series was my ideal camera at the time. At that time dSLRs ruled, it was the adolescent years for µ43, Sony renamed the NEX system as αlphα thereby abusing its own A-mount users, and Fujifilm was introducing the X system. Not to mention. . . . -Oops: start again-

The K-5.ii /.iiS was my ideal camera at the time. The K-5 was quite amazing, but the II series added an AF system with accuracy to EV-3 and 'stickiness' to AF point selection in continuous AF. The gapless screen on the back really improved the view. The AstroTracer on the K-5 bodies was also quite cool! And for what it's worth, the dXo score of 82 is the highest Pentax aps/c mark yet (though the K3/3 will probably claim that crown soon).

Future developments brought the K-3: it was a bit larger, annoyed purists with the "RICOH" logo on the back, and bumped up resolution.  A few cool features dropped in like composite modes (and later PixelShift in the 3.ii model). The AF switch became a switch and button, but no massive changes to its workings.

Developments also brought the K-S1: it was tiny, with a 'tweener 20Mpx chip - and dropped most everything Pentax dSLRs were known for (weather seals, two control dials.. even auto image rotation!). I bought one (OK maybe two) but could not manage the differences. I sure wanted to like it though, as the 20Mpx sensor impressed me and the new multi-WB feature sounded intriguing.

The K-3 series continues to this day, but the KS series made one more move (the KS|2) before restoring Pentax numerical tradition with the K70 (rendering the KS bodies as K∙60 stand-ins). Pentax referred to the S series as special/experimental/tech demo - so consider the K70 as the fruit of the KS labors. 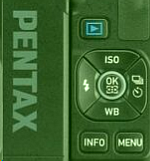 Now - what makes the K70 a bump from the K62 -er KS|2? It got the 24Mpx sensor, more memory for image buffer and fps boost, and added a couple of features like the red night-view screen & an extra (unuseable but available) stop to iso 102400. Ah, it has 14-bit raw* instead of mere 12-bit depth on the K62.. important but not a deal-break for such as me. AF, VF, battery and battery life - all the same.

Not at all - it's the only NFC-enabled Pentax, for one. And the only 20Mpx with wx seals - claimed as the smallest and lightest sealed dSLR, though the K70 isn't behind by much there. And the earliest K-body with clarity adjustment in-camera!

In other words: it's the full* K-5iis imaging feature-set plus newer-tech composites and components. and a flip screen. It uses the smaller Li-109 battery not the Li90 so a second battery will be needed. Sounds good enough for me.

If it can be tarred with any brush, that would be for the cheap capacitor used for aperture actuation. Since failure of that part has been an issue with every K# body from 30 to 70 it's the biggest stain in Pentax' collection and shared by many. When the time comes, my soldering iron will be ready.

Read more »
Posted by granitix / Longviewer at 2:10 PM No comments: